What Is Obstructive Sleep Apnea?

Your Guide to Implant-Supported Dentures

Implant-supported dentures offer the durability and reliability of dental...

What Is Root Canal Therapy? Root canal therapy is...

Some parents wonder why they should take care of...

When you first get braces or have them adjusted,...

Gingivitis—a word most of us know from common television...

A diagnosis of obstructive sleep apnea (OSA) can be a major surprise for most people. It can be abrupt when you’re in a conversation with a physician about snoring and excessive daytime sleepiness (EDS), and suddenly you’re a patient under care for a chronic breathing disorder. Doctors often need to address the immediate question, “What is obstructive sleep apnea?”

Sleep apnea is associated with conditions like diabetes, heart disease, stroke, obesity and high blood pressure. A Wisconsin sleep cohort study, which used in-lab sleep testing, showed that the prevalence of OSA was 9% for women and 24% for men in a sampling of 602 adults between 30 and 60 years of age. This study was also able to make the link between untreated OSA and a negative impact on quality of life in this patient population.

Treatments for sleep apnea are few; they include lifestyle changes like weight loss, continuous positive airway pressure (CPAP), oral appliance therapy (OAT), or invasive procedures like maxillomandibular advancement surgery (MMA). Understanding sleep apnea as a disease requires an understanding of the mechanics of respiration and basic anatomy of the upper airway. This article will discuss how sleep quality is impacted by this condition, as well as what you can do to help prevent the negative health consequences of OSA.

Breathing is composed of two parts: mechanical ventilation, which uses the muscles of the diaphragm and intercostal muscles to pull air into the lungs; and gas exchange, which is the process of passing oxygen from air into the bloodstream and exhaling carbon dioxide. It’s estimated that the average person takes between 17,280 and 23,040 breaths a day.

Diaphragmatic breathing (aka tidal breathing) involves the amount of air that is moved in the lungs, which is called tidal volume. This does not involve the entire capacity of the lungs. There is reserve capacity that will accommodate additional demand (e.g., while running or doing other aerobic exercise). 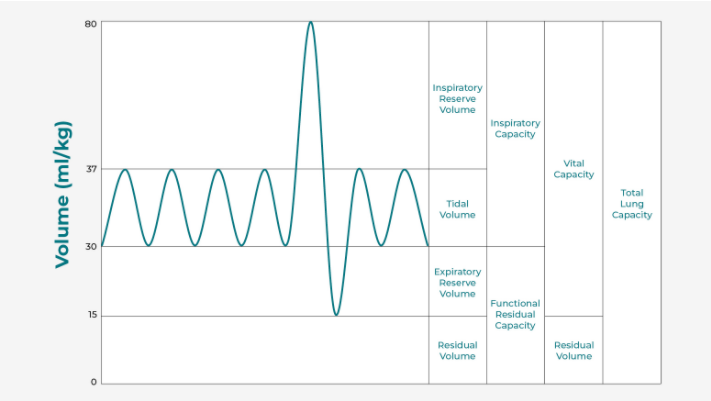 Apnea, a Greek word that means “breathless,” can be categorized into three types:

OSA is a condition that primarily concerns the upper airway. The nasal passages, nasopharynx, oral cavity, tongue, adenoids, tonsils, oropharynx and hypopharynx are all structures that can collapse, obstruct or be obstructed in some other way to restrict breathing or increase the airway’s resistance (work of breathing). This condition commonly includes loud snoring, and the sleep disruption it creates causes sleep fragmentation, which results in excessive daytime sleepiness.

Most quiet breathing is through the nose. Nasal breathing is very important because the nose has a small volume where air can be warmed, moistened and filtered with thick, sticky mucus, before being delivered via the trachea to the lungs.

During sleep, the physiology of the airway changes. For example, tissues relax and respond differently to airflow and respiratory effort. The tongue forms most of the wall of the pharynx. Changes in muscle tone, either stiffening or relaxing, affect the shape, size, and collapsibility of the oropharynx and the velopharynx.

When relaxed during sleep, the jaw falls open and the tongue drifts back against the posterior wall of the oropharynx and hydrostatically adheres to the thick mucus in the throat, forming a seal and obstructing the airway. The chest walls and abdominal muscles continue to try to move air in and out of the lungs; however, with the airway blocked, negative pressure builds until the patient gasps awake, restoring tone to the tongue so that the patient can get a few gasps of air before repeating the process a few breaths later.

How Sleep Quality Is Impacted

In order to demonstrate the impact of upper airway dimension and caliber on breathing during sleep, you may try the three exercises shown below. They will help you understand the difference between upper airway resistance syndrome, snoring and obstructive sleep apnea. If you find them compelling, you may decide to incorporate these exercises into your patient or dental team education.

This is upper airway resistance syndrome (UARS). It’s not a clinical condition, but the effect of increased effort can affect sleep quality, leading to fatigue and unrefreshing sleep. These shallow breaths can be scored in a sleep lab as hypopnea, a sequence of shallow breaths for 10 seconds or longer while asleep when airflow is at least 30% lower than normal (see below). 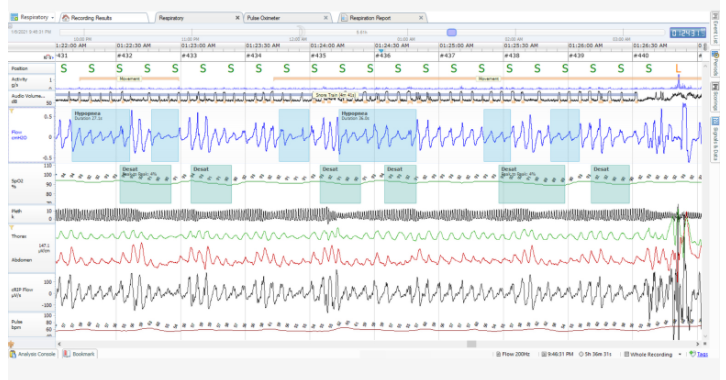 This chart, courtesy of Nox Medical, shows information from a Noxturnal® analysis recorded during sleep. The blue boxes indicate airflow that has dropped by 30%. The slightly out-of-phase green boxes indicate drops in Sp02 (arterial blood oxygen) that is related to the previous episodes of shallow breathing or hypopnea. 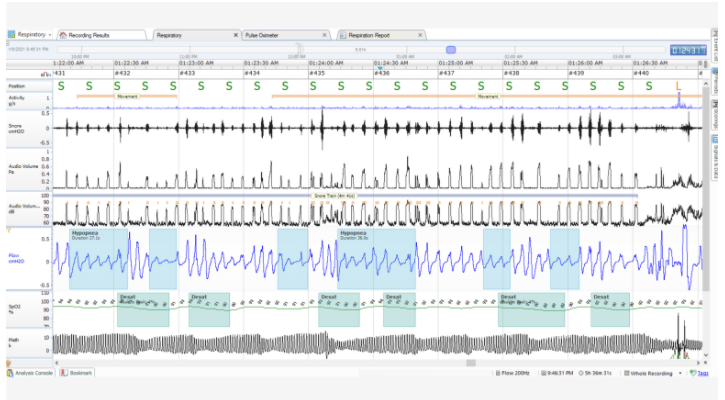 Some dentists use a variation of exercise No. 2 for finding the optimal starting position for a mandibular advancement device (MAD). It is considered by some to be helpful to have the patient make a snoring sound, and then, by advancing the mandible forward, pick a clinical start point based on the patient’s ability to make the snore sound.

This, of course, is not an exact science because tissue tone, location and response to therapy is different when the patient is asleep. The adjustability of MADs ranges from 6 mm in the case of a Silent Nite® Sleep Appliance all the way up to 15 mm for a TAP® appliance, allowing for fine titration as needed for therapy.

This chart from Nox Medical shows the breathing pattern of a sleeping patient in the supine position (on the back). Each segment is 30 seconds. There is the absence of airflow (in the tan-colored field) with a decrease in Sp02 (arterial oxygen saturation; in green) and corresponding respiratory effort (indicated in black and red lines). Notice that the airflow stops, then the Sp02 drops a few seconds later.

Oftentimes, patients are unaware that they have obstructive sleep apnea. When they seek treatment, the primary complaint is snoring or, if the condition is severe, they may complain of excessive daytime sleepiness. OSA can negatively impact sleep quality and overall health; therefore, treatment can be life changing. 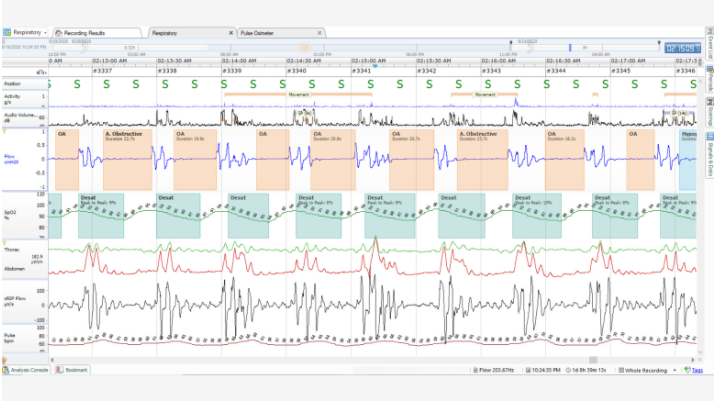 Breathing is an ongoing 24-hour activity. It is clear that the physiological response to sleep affects the tone, shape and dimension of the upper airway, which affects sleep quality. In general, patients are unaware of the impact that their snoring has on their overall health. When patients seek treatment, the primary complaint is snoring or, if the condition is severe enough, they complain of excessive sleepiness. Simple exercises can show patients what happens in the airway during sleep and help them understand the available solutions.

Dr. Botsford is proud to be affiliated with the following organizations: 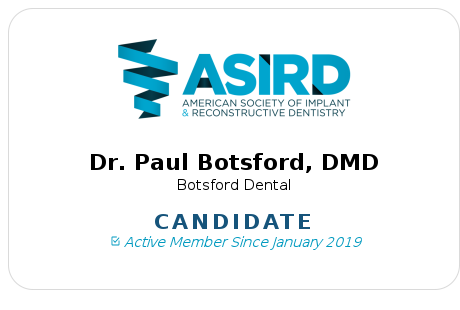 We look forward to meeting you.

We'd love to hear from you! Please send us a message using the form below, request an appointment using our convenient appointment request form or call us today at (541) 779-5654.